Bolton’s Best Bar None (BBN) scheme has been voted the ‘Most Innovative’ in England and Wales, in the national Best Bar None Awards. 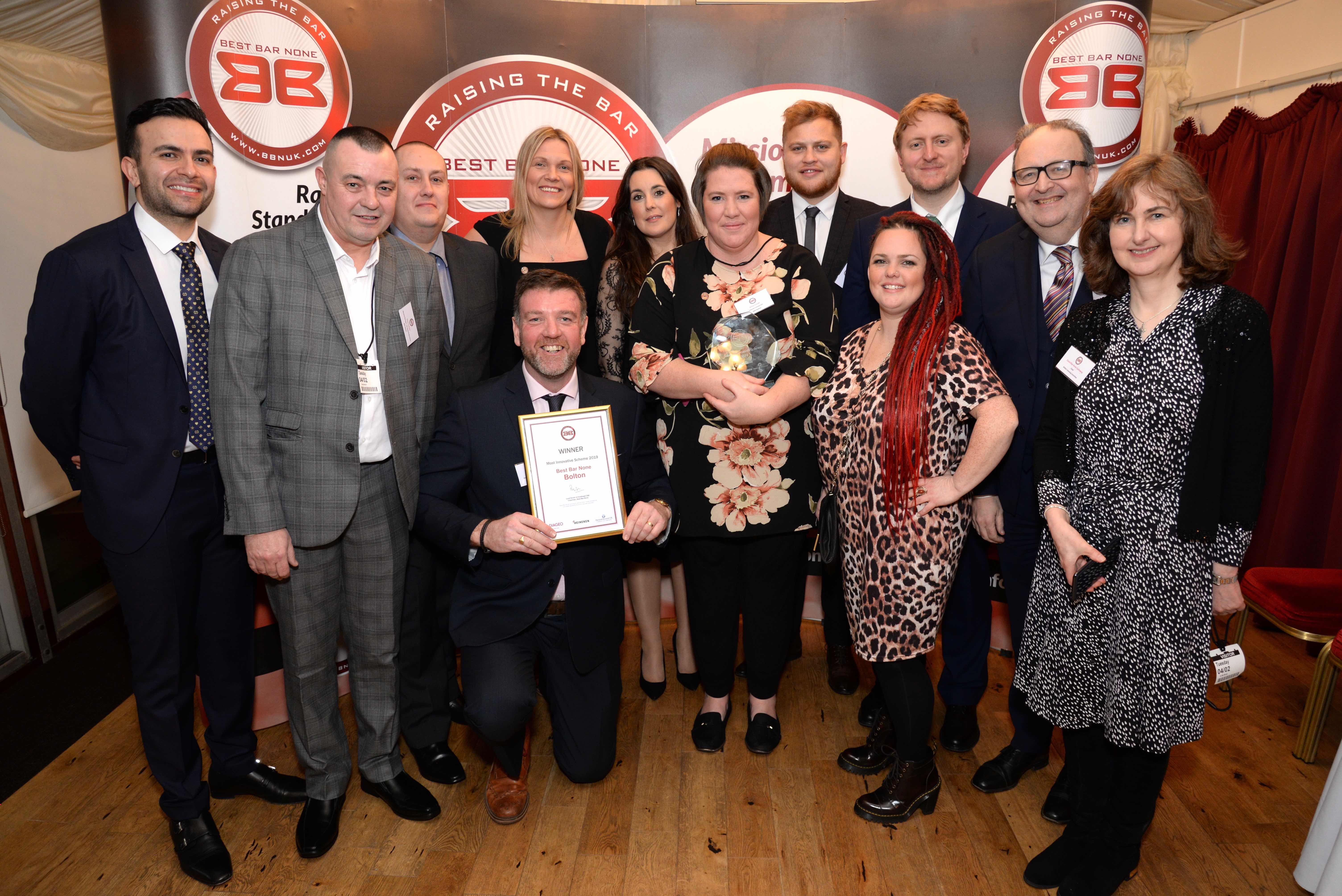 The team was awarded the winning trophy at a prestigious ceremony held in the House of Lords last night [Tuesday 4th February 2020].

Best Bar None is a Home Office-backed scheme that sees the alcohol industry working collaboratively with local authorities and the police to promote responsible drinking and higher professional licensing standards in bars, pubs, clubs and restaurants.

The award for Most Innovative Scheme is presented to the regional scheme that has developed the most creative concept or initiative designed to make a difference in the local area.

It has achieved this by introducing initiatives like Ask for Angela - where customers can discreetly alert trained staff if they are feeling threatened on a night out – and Get Home Safe (#GHS), which reminds people to always use a licensed taxi.

To promote awareness the scheme recently launched a QR code which members of the public can scan to find out more about the public safety initiatives in place.

In addition, all staff in BBN accredited venues wear Best Bar None branded lanyards. A Best Bar None promotional video highlighting the work of the scheme has also been developed and was broadcast around the streets of Bolton via a media vehicle, during the busy Halloween celebrations.

Police Constable Andrew Vernon, Bolton’s Scheme Coordinator, said: “We are so proud to have been recognised in the national awards for our commitment and dedication to creating a safe and welcoming environment in Bolton, particularly when it comes to the night-time economy.

“We’re really proud of everything we’ve achieved in the last 12-months. As well as introducing ‘Ask for Angela’ and the Get Home Safe (#GHS) initiative, we have worked hard to raise awareness of the scheme and promote public safety across the borough.”

Leader of Bolton Council, Cllr David Greenhalgh, said: “Huge congratulations to the team on this well-deserved national award. It shows a true partnership between the council, police and licensees in Bolton, working at its best, to make our licensed premises as safe as they can possibly be.

“To be named as the most innovative scheme on a national level is a brilliant achievement. People should be able to enjoy a night out safely and there is no doubt that well operated businesses contribute to providing a safe environment for our visitors.

“We value the work that everyone has put in to raise the standard of licensed premises.”

Mr Lord added: “Bolton is the best attended Best Bar None scheme, across the whole of Greater Manchester. That shows a pride and commitment from everyone involved. It also shows a determination that operators who have signed up want to run a safe, diverse and inclusive night out for their customers.

“I’m a big advocate of the Best Bar None scheme. The plaque sends out a signal that the premises, staff and operator actually care. I certainly look forward to working with operators across the Bolton Borough and hope that next year it grows even more.”

Lord Smith of Hindhead, Philip Smith, Chairman of Best Bar None, said: “The national awards recognise and reward schemes for their commitment to Best Bar None and highlight their efforts to make towns and cities across the country safer and more desirable places to visit.

“All of the finalists have done incredibly well to make the shortlist, but Bolton Best Bar None stood out in the eyes of the judges as being thoroughly deserving of this award.

“The team continues to maximise its impact on the local community and maintain strong and proactive relationships with licensees, the police and local authorities. My congratulations go to all of those involved.”

Best Bar None has been running for more than 16 years and there are currently active schemes encompassing hundreds of licensed premises over 70 towns and cities in England and Wales, as well as the new Central Scheme, which provides Best Bar None accreditation for businesses which are outside any current scheme area.

Premises are audited by trained assessors for operational standards, policies and procedures, as well as the education and training of staff.

The local scheme has been organised by the district authorities (Copeland, Allerdale and Carlisle) and Cumbria Constabulary, with support from Cumbria County Council, the West Cumbria Community Safety Partnership, and Pubwatch. It is run by steering groups made up of police, local authority and industry representatives.

A record nine regional finalists reached the three categories in the national awards this year, Best Overall Scheme, Most Innovative Scheme and Best New Scheme. The complete list of winners is as follows:-

Most Innovative Scheme
Awarded to the most creative concept or initiative introduced to make a difference in the local area.
• Bolton

Best Overall Scheme
Presented to the scheme with the biggest impact on its local area.
• Sheffield

Best New Scheme
Open to any scheme running for less than 18-months.
• Cumbria