Remembrance Services will be taking place around the borough

Tickets have gone on sale for this year’s Remembrance Concert in Bolton.

The Remembrance Concert on Thursday 7 November is Bolton’s 30th anniversary of this event, and forms part of the borough’s Remembrance commemorations. 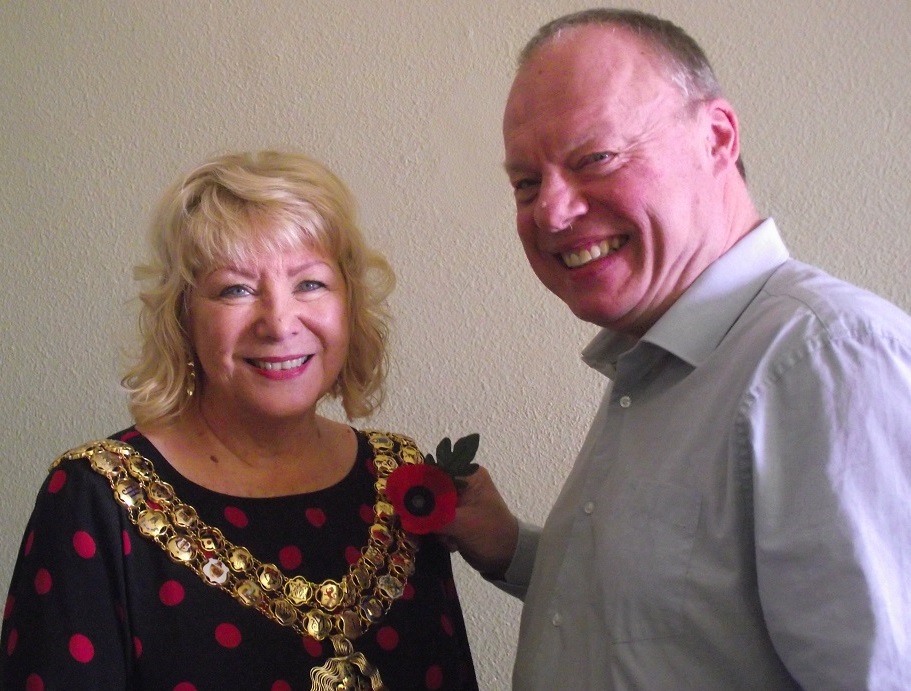 Colour Sergeant Shaun Carter, Greater Manchester Army Cadets, presents the Mayor of Bolton, Cllr Hilary Fairclough, with a poppy as part of this year’s appeal from the Royal British Legion.

The tributes to the those who have fallen in conflict will also see the Annual Remembrance Service and Armistice Day Service taking place.

The Remembrance Concert features performances by the Lancashire Artillery (V) Band and local artists. The Act of Remembrance will be conducted by The Vicar of Bolton Rev. Canon Dr. Chris Bracegirdle.

Rev Phil Mason will read the story of Harry Goslin, the Bolton Wanderers captain who signed up along with his fellow players and went to war. Sadly Harry lost his life in the war. Harry’s son Bill Goslin and Harry’s grandson, great grandson and great granddaughter will be present on the night.

It takes place on Thursday 7 November from 7pm at the Albert Halls, Bolton Town Hall. Tickets are £6 with proceeds to cadet forces and veteran’s organisations.

Bolton’s Annual Remembrance Service takes place on Sunday 10 November at 10.40am on Victoria Square. It will be led by the Vicar of Bolton and will include a two minutes silence, prayers and hymns, silence, wreath laying and a parade of veterans.

Everyone is welcome to attend.

Monday 11 November is Armistice Day, the anniversary of when the guns fell silent during the Frist World War. A service, led by the Vicar of Bolton, will take place at 10.50am on Victoria Square with a two minutes’ silence.

Remembrance Sunday Services around the borough

Meet at the British Legion Club on Belmont Road at 9.30am to march through Astley Bridge to St Paul’s Church, Newnham Street, for the Remembrance Service at 10.30am.

Also there is a Remembrance Service at Astley Bridge Baptist Church, Eden Street starting at 10.45am.

The Blackrod Remembrance Service will be held on Sunday 10 November at 2.15pm at the Cenotaph in Blackrod Cemetery.

The service will be followed by the parade to St Katharine’s Church for the Service of Remembrance commencing at 3pm.

The Remembrance Service takes place at Dunscar War Memorial, with everyone welcome. Please gather at 10.30am.

Everyone is invited to gather on Market Street (outside Home Bargains) at 10.30am and process down to the Cenotaph.

The Remembrance Service will take place at the Cenotaph at 11am, following which everyone will proceed back along Market Street.

All local organisations and residents are invited to join the Town Mayor Councillor Gordon Stone, members of the Town Council, the Royal British Legion and Rivington and Adlington Brass Band for the Annual Parade and Service of Remembrance on Sunday 10 November.

The Town Mayor will lay a wreath at the Locomotive Estate War Memorial at 11am. The Parade leaves at 11.40am from outside the RMI Club on Ramsbottom Road, and will proceed along Victoria Road, Church Street and Lee Lane, then on to Lever Park Avenue for the Service at the Garden of Remembrance at 12.15pm, returning via Chorley New Road to Horwich RMI for dismissal.

Everyone is welcome to gather at 9.15am at Kearsley Cricket Club on Springfield Road. The parade will process to the Cenotaph from 9.30am. Then it will walk along Manchester Road to St Stephens Church for the Remembrance Service at 10.15am.

Representatives of all the churches, band, uniformed organisations, local councillors and the community meet at Mytham Road car park at 10.30am on Sunday 10 November.

They march up Mytham Road, along the rear of Fletcher Street and then Market Street to congregate outside the cenotaph on Coronation Square in front of the Library where a Service of Remembrance will take place.

On Sunday 10 November there will be a parade from St Bartholomew’s C.E. Primary School, from 9.40am to the Parish Church of St Bartholomew. The Church Service takes place at 10am and at 10.40am everyone departs for the War Memorial.

At 11am there will be a service and laying of wreaths at the memorial. Members of the public are invited to place single flowers on the War Memorial after the parade has departed.

At 11.15am the parade leaves the War Memorial and will proceed along Church Street, Lord Street, The Avenue, Central Drive, Bolton Road, Market Street and Wigan Road to St Bartholomew’s C.E. Primary School. The Town Mayor will take the salute on the Town Hall steps.

In 2019 The Royal British Legion is asking communities across Britain to join together and remember the service and sacrifice, friendship and collaboration of the men and women of Britain, the Commonwealth and Allied nations who fought together 75 years ago.

Allies from the Commonwealth and other nations had fought shoulder to shoulder with Britain since the start of the Second World War, but in 1944 this collaboration would result in victory in three critical battles: Monte Cassino, D-Day, and Kohima and Imphal.

At Monte Cassino, a 240,000 strong Allied army with contingents from six continents, opened the way to the liberation of Rome; at D-Day 13 nations collaborated to land 156,000 men in Normandy; and at Kohima and Imphal one of the most ethnically diverse armies in history would come together to win one of the most remarkable victories of the war.

The Mayor of Bolton, Cllr Hilary Fairclough said: “The Remembrance events are our opportunity to honour those who fought and died in the two world wars and other conflicts.

“We gather every November, on the anniversary of the armistice at the end of the First World War, to commemorate those who fought in conflicts, and who continue to serve our country.

“Every year the occasion becomes more poignant as veterans from the Second World War pass away and the conflict slips from living memory. It is even more important that their sacrifice remains in our thoughts.”

Remembrance Concert tickets are available from www.alberthalls-bolton.co.uk or by calling the ticket line on 0843 208 0500