Celebrity chef James Martin has hailed Bolton Food and Drink Festival the best in the UK as hundreds of thousands of visitors took advantage of the glorious weather to visit the annual event. 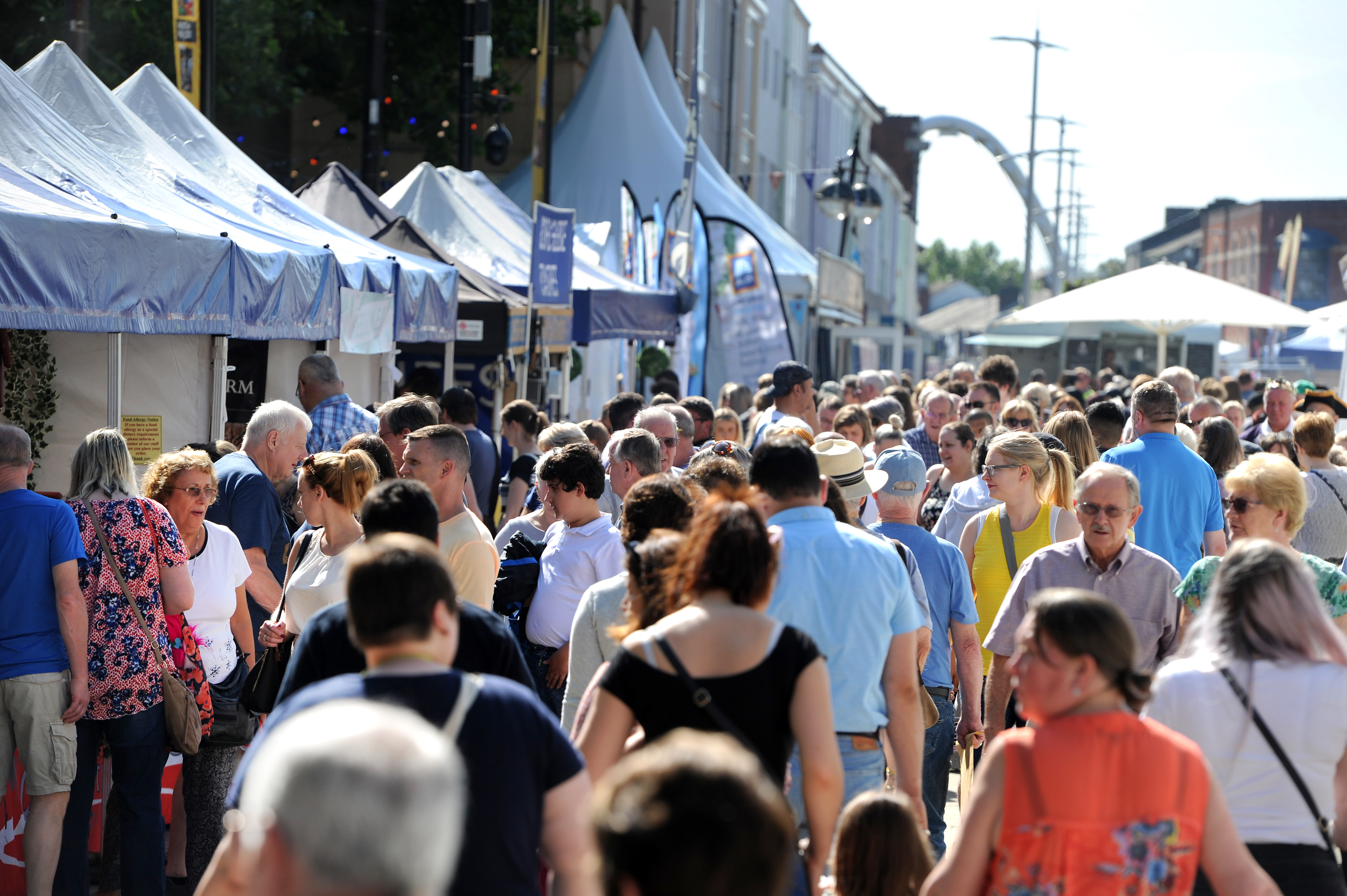 James arrived in Bolton fresh from his band’s first performance in front of thousands at Car Fest, which he admitted was the scariest thing he had ever done.

On his 11th appearance at the festival, he said: “This is the biggest and best food and drink festival in the country. I love Bolton. I love the people and I love the place. The people make the place. To be invited is a privilege.”

The event is organised by Bolton Council, in association with Aldi, and organisers say it has been a huge success.

Official figures are still being calculated, but it is hoped the four-day Bank Holiday event will have another record-breaking year.

And there was also lots to keep the children occupied – the former BHS unit in Crompton Place was transformed into the Family Zone.

There were also more than 70 live music acts on two stages, as well as street entertainment over the four days.

Organisers are confident that last year’s 274,000 visitor figure will be smashed. The Leader of Bolton Council, Cllr David Greenhalgh, said: “What a festival. What an event. We have been blessed with such wonderful weather.

“We absolutely agree with James Martin that the festival is the best in the country.

“Everyone I’ve spoken to has been delighted and enjoyed it so much. It has been an amazing advert for the town to our investors.

“There has been something for all the family – amazing cuisine from all over the world, a feast of live music, lots of fun for all the family and, of course, some of the best loved and talented chefs in the country demonstrating their skills in Bolton town centre.

“Thank you to all the council team who put a lot of hard work into the event and of course all of our sponsors especially Aldi, without whom we could not hold such a major event.”

Ruth Doyle, Regional Managing Director at Aldi UK, added: “Bolton Food and Drink Festival was once again a massive success! We are a huge supporter of the festival and it gets better and better every year.

“We are hugely proud to sponsor the event for the fifth year, and we hope that everyone enjoyed it as much as we did.”

He said: "You should be proud of what you’ve created at Bolton. I always say that I have been adopted twice in my life – once when I was six weeks old and then eight years ago by the town of Bolton.

“The competition is an amazing opportunity to support the next young talent into the industry, next year we’ll be able to celebrate the success of that chef at this festival.”

He was joined by baker Rose Dummer, from Channel 4’s Extreme Cake Makers, who unveiled a huge cake of Bolton Town Hall and the iconic arches on Le Mans Crescent.

Kay Gajra, a Bolton-based cake maker, also created a giant letter B cake as part of the This is Bolton campaign.

The Hairy Bikers, Dave Myers and Si King took centre stage on Saturday the second day of the festival. They said they were delighted to be back in Bolton at the festival, their first appearance for eight years.

Dave said: “We first attended in 2009 and we were impressed with it then for a town the size of Bolton, but since then it has grown enormously. It has gone from strength to strength.”

Si added: “It’s very important you have events like this. This is a festival for the people – it is magnificent.”

Gregg Wallace was Sunday’s headliner, making his first appearance at the event. He said: “Bolton is a really nice town. Bolton Food and Drink Festival attracts some of the biggest names in food and I’m chuffed to bits to be here.”

Along with celebrity chefs, the weekend saw a host of free demonstrations in Bolton Market and Market Place Shopping Centre from top chefs including social media star Jackie Heaton - aka The Baking Nanna - and local favourite Alain Job.

Other highlights included a gin festival, a comedy night with John Archer, live music from Bolton’s finest bands and a fringe festival in Bolton train station.

Traders were also pleased with the event. Churtopia has been at the festival for the last eight years. Daniel O’Grady, from the churros company, said: “Bolton attracts people from all over the country, both customers and traders. We will definitely come again. We love being here.

Eddie Pope, was also there for the fifth-year running at What’s Your Beef. He said: “Whenever we come here everyone is amazing, we do a lot of these and nothing is run as smoothly as Bolton Food and Drink Festival.”

It was a first visit to the festival for Sofia Lulat, director of Fifi’s Cheesecakes, a Bolton-based company she launched less than a year ago.

Sofia, from Over Hulton, said: “We have had some great feedback from people who have visited our stall and the event has been so busy.”

The event attracted people from all over the world. Linda Djemaleddine, from Paris, came especially for the festival and watched the Hairy Bikers cooking.

She said: “In France we have food festivals and music festivals. This is the first time I’ve seen music, food and drink altogether. The people are lovely, it’s really well organised and the weather is fantastic.”