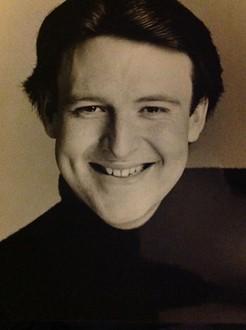 A Christmas day baby born to delighted and loving parents Margaret and Roy, David lived his entire life at the family farm in Bradshaw, owned for four generations of Isherwood’s.

David’s parents were both teachers of music and founders of Bolton School of Music, so it was inevitable that David would follow in their footsteps and eventually take up a career in music and theatre. He often recalled his early life of the whole family, with aunties and cousins all singing round the piano. In particular, on Christmas day when David would read poems to the family, he was a born mimic who could bring those words alive and keep the whole room enthralled.

School life for David started at Cleveland’s where he made many happy memories and then on to Manchester Grammar, before finally doing his degree at Bretton Hall. There he attained a degree with honours in theatre and the arts. At Bretton David made lifelong friends many of whom are now living all over the world, but thanks to social media he kept in regular contact remaining a huge part of their lives.

After finishing his degree he moved to the bright lights of London working in the Theatre, he even did some advert voiceovers which he said certainly kept the wolf from the door. He toured the country performing reviews, comedy sketches, plays and musicals. He worked with the Actors Company at Wigan Pier, and toured in ‘Oh What a Lovely War’, ‘A Funny Thing Happened on the way to the Forum’ and many more. Finally he got a part in London’s West End in Les Miserable, life was good and full of promise, but sadly tragedy struck and David was diagnosed with kidney failure so unfortunately he had to retire from the stage career he had planned. He then came home to Bolton for six years of dialysis before receiving his first kidney transplant.

During that time David reinvented himself and built up a new business selling Kitchenalia at Botany Bay, specialising in ground coffee and teas of every flavour imaginable. He also restarted his political career, soon rising through the ranks and becoming the Chairman of the local party.

In 2006 he became Councillor for Bromley Cross and the shadow spokesman for adults’ services. This was despite having to have another kidney transplant, a heart valve replacement, and surgery to repair a broken spine. David’s was undaunted and he quickly moved up the ranks to become Deputy Leader in 2011, and finally Leader of the Conservative group in 2013. Then in 2019 he became Leader of Bolton Council, and was the first Conservative Leader of Bolton Council for over 40 years, which was one of his proudest moments.

David was extremely talented, and highly intelligent he strove every day to make Bolton a better place. He reached out to all communities and treated everyone as equals, quickly gaining their trust that he was a man of his word.

He will be remembered for is his kindness, his openness, and his fairness by the people of this borough.

By his hundreds of friends there will be many special memories, no one ever felt left out with David, he made everyone feel special and he will remain in our hearts forever.