Residents and businesses in Bolton can help shape Greater Manchester plans to reduce air pollution on local roads as well as proposals for minimum standards for taxis and private hire vehicles. 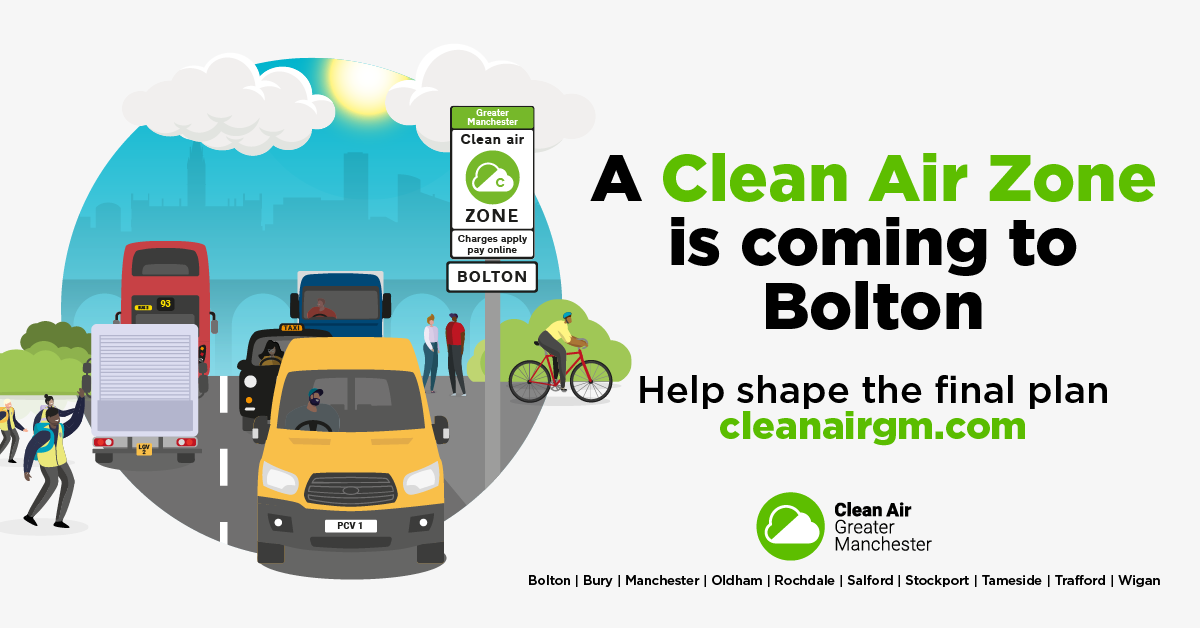 Two consultations opened on October 8 and run until December 3, and people in Bolton are being invited to have their say.

Plans for minimum licensing standards for the taxi and private hire trade will impact on all vehicles, drivers and operators licensed in Bolton and across Greater Manchester.

Meanwhile a planned Clean Air Zone for Greater Manchester will see charges introduced for higher polluting commercial vehicles driving on local roads. Private cars and motorbikes are not included in the scheme.

Bolton residents can comment on key elements of the Zone including its proposed boundary, daily charges, discounts and exemptions, and the funding packages to support local businesses to upgrade to cleaner vehicles.

Government has already awarded Greater Manchester £41m initial funding and leaders are seeking more than £100m further funding, alongside a £10m ‘Hardship fund’ to support those considered most vulnerable to the financial impacts of the CAZ.

The Minimum Licensing Standards would cover drivers, operators and vehicles, and go further and greener than the government’s new standards for the sector by including a step-by-step pathway to reducing harmful emissions from taxis and private hire vehicles.

A temporary exemption for wheelchair-accessible taxi and PHVs is also being proposed as well as a ‘Try Before You Buy’ scheme for hackney drivers to test drive electric taxis. Plans for a network of electric vehicle charge points just for taxis and private hire vehicles are also being developed.

Find out more about the Clean Air Zone proposals, including proposed charges, at cleanairgm.com. Or head to gmtaxistandards.com for more information on plans for Minimum Licensing Standards.

A virtual engagement space will be open 24/7 during the consultation period and has been created to replace face to face consultation meetings.

Information on all active consultations is also available on the Bolton Council website: bolton.gov.uk/consultations-petitions/consultation-surveys

For support to respond to these consultations, or to request copies of the summary documents and questionnaires, please email  info@cleanairgm.com or info@gmtaxistandards.com or phone 0161 244 1100. Support for non-English speakers is available on 0161 244 1100.