A store owner has been handed a four-figure fine, while many more are facing legal action, after raids by Bolton Trading Standards unearthed thousands of illicit tobacco products. 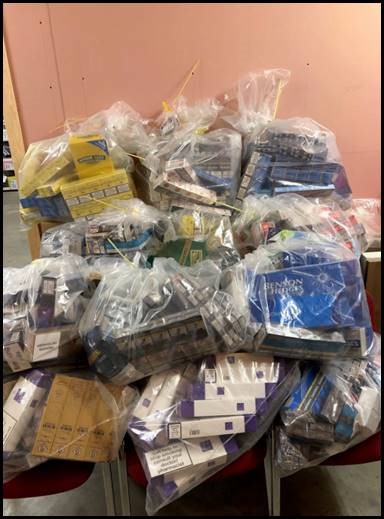 A store owner has been handed a four-figure fine, while many more are facing legal action, after raids by Bolton Trading Standards unearthed thousands of illicit tobacco products.

During a multi-agency inspection of M & M Minimarket in Halliwell Road in March, the team quickly discovered a number of illegal cigarette packets and tobacco pouches in a black bag.

Illicit tobacco can be counterfeit items manufactured illegally in the UK, or brought in from overseas without duty being paid. The goods are then sold to the public at significantly lower prices.

Shop owner Pulla Ahmed, who tried to sneak the bag out of the back exit when officers arrived, claimed to have bought the items for personal use from a man who came into the shop just 20 minutes earlier.

When asked to provide CCTV evidence of this transaction he claimed his surveillance system had stopped working.

Bolton Magistrates’ Court found Mr Ahmed guilty of intent to supply illegal cigarettes and ordered him to pay a £100 fine and £1,300 in costs.

The raid was part of an ongoing campaign by Bolton Council and partner agencies to clamp down on the trade in illicit tobacco.

Illegal tobacco products represent a serious threat to public health, deny valuable tax funding to the NHS and other public services and the black-market trade has been linked to organised crime.

The store owners, who cannot be identified due to pending legal action, could now face fines and other sanctions against their businesses.

Buying illicit tobacco takes valuable resources away from the NHS while putting cash into the pockets of criminals.

“Illicit tobacco harms both the health of the individual and damages the community as a whole.

“Bolton Council will continue to clamp down on business owners who ignore their legal and moral obligations by selling these products.

“I also appeal to anyone who may consider buying illegal cigarettes.

“It is not a harmless way to save money, it puts your own health at risk and takes valuable resources away from the NHS while putting cash into the pockets of criminals.”

Illegal tobacco sales can be reported anonymously via email or online.