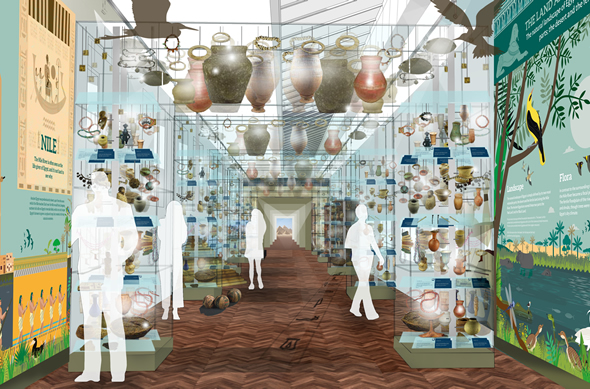 The refurbished museum officially opened on Saturday 22 September at 9.30am.

As well as objects from Bolton’s history and of local interest there are three new galleries.

Visitors to ‘Bolton’s Egypt’ can learn about the town’s important links to the world of pharaohs and pyramids in the family-friendly, interactive gallery. It now has space for 2000 objects, which more than doubles its previous capacity.

The new exhibition space features a full size reproduction of the burial chamber of Thutmose III, which visitors can walk through. It puts on show some of the 15,000 ancient Egyptian artefacts in Bolton’s Egyptology collection including the oldest sample of mummification in the world.

Bolton’s Egyptology collection is one of the most significant ancient Egyptian collections in the UK. A local mill owner’s daughter, Annie Barlow, was a member of the Egypt Exploration Society in the 19th Century and helped to raise funds for excavations in Egypt. The Egypt Exploration Society donated numerous finds to the Chadwick Museum – the Victorian forerunner for Bolton Museum.

Bolton’s Egypt documents this historical connection as well as exploring ancient Egyptians’ fascination with the afterlife.

A new ‘Bolton’s Nature’ gallery has been created which, as well as objects from the natural history collection, includes new animals such as a huge brown bear from Manchester Museum.

The museum’s collection of paintings, sculptures, statues and other artworks is also on display in a new gallery called Bolton’s Art.

The museum has been closed since December 2016 while the work took place. The project also includes work to the other exhibition spaces in the museum and art gallery along with essential maintenance to the Grade II listed building.

The £3.8 million scheme has been funded from one off capital funding, a contribution from Eddie Davies and a grant from the DCMS/Wolfson Museums and Galleries Improvement Fund.

The Leader of Bolton Council, Cllr Linda Thomas, said: “Bolton’s Egypt is a wonderful showcase of our nationally important artefacts and the museum is renowned for its extensive Egyptology collection.

“This will be a major tourism attraction for Greater Manchester and the North West which will attract national acclaim, enhance our visitor numbers and further boost business in the town.

“As the Culture Lead for the Greater Manchester Combined Authority I am proud that as a town Bolton is helping to put us on the map as a region of great cultural activity.”