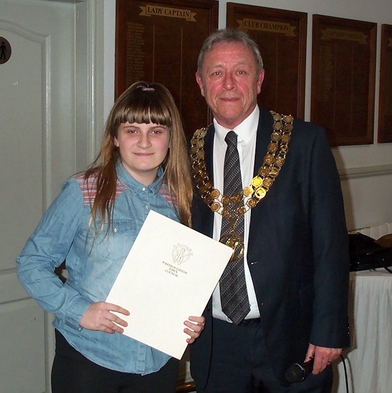 The Town Mayor, Cllr Arthur Price, presenting a Certificate of Achievement to Sophie Ashton in recognition of her many achievements.

Sophie is a keen footballer and has a passion for acting, recently completing the London Academy of Music and Dramatic Art exams and appearing on television in The Big Audition.  She has performed in pantomimes and other productions and taken part in a TV presenting course.  Sophie also enjoys writing poetry, donating to organisations for the homeless and presenting on Howfen Radio.